I have been looking to take the family to South Africa.  It appears ANA has the best mileage, but taxes and fees are terrible.  Do you have any thoughts?

Aaron is mostly correct.  ANA Mileage Club can save you tens of thousands of miles for flights to South Africa.  But it also adds fuel surcharges to most of its partners.

If you collect AMEX Membership Rewards or Starwood points, you can transfer them to ANA to book award flights.  Or move Marriott points to Starwood and then to ANA.

Using airline miles on award flights to South Africa is a great idea, because paid flights are expensive and rarely discounted.  But fuel surcharges can be very high.

ANA stopped collecting fuel surcharges on most of its own flights in Spring 2016, but it keeps adding them to most of its partners.

I’ll show you how to save miles and money, and pitfalls to avoid for award flights to South Africa.

ANA is a Star Alliance member, and it has a few non-alliance airline partners, too.

There are several airlines that can take you to South Africa using ANA miles, but the only non-stop option is with South African Airways from New York (JFK) to Johannesburg.  They also fly direct (one stop in Accra or Dakar) from Washington, DC.

Other ANA partner airlines that can take you from the US to South Africa include:

You can use ANA miles to book flights on any of these partner airlines.  But some will cost more in fuel surcharges than others.

And you usually do NOT have to begin your travel from a US city these airlines serve.  For flights on Star Alliance partners, your award flight booking will include domestic segments on a Star Alliance partner (like United Airlines) to get you to your US gateway airport.

ANA treats all of Africa (including South Africa) and the Middle East as one region.  Their redemption rates are terrific in all classes of service.  For round-trip flights from the US to South Africa, you’ll pay:

Unfortunately, ANA does NOT allow one-way travel, but it allows a stopover and up to 2 open jaws.  And you can have a stopover almost anywhere.  For example, you can fly to Johannesburg via Europe, Africa, or the Middle East.

How to Search for Award Flights

The easiest way for most folks to search for award flights using ANA miles is through the United Airlines website.  Find your flights there first, then enter the segments into the ANA award engine.

Remember, you can only book a partner’s flight if the United Airlines website shows Saver award seats, like what you see in this screenshot.

If you don’t see the word “Saver,” the flight you might have found on United.com will not be available to book with ANA miles.

Remember, though, that United.com sometimes displays “phantom” available award seats (that’s a technical glitch when you see an award flight as available, but in reality it’s not, and you can’t book it).  So, if ANA doesn’t show an award seat you’ve found on United.com, this might be why.

1.   Why Use United.com for Searching Award Flights to South Africa?

Let’s say you want to fly to South Africa from New York in June.  The most convenient way to get there from the US (especially if you live in the Northeast) is on South African Airways, because they fly to Johannesburg from New York and Washington, DC.

3.   Coach Awards Are Much Easier to Find

If you don’t mind flying coach, it’s easier to find award seats.  I searched for a coach award ticket on June 15, 2017.

To check a date for the return flight, click “Edit search” in the middle of the page.  Enter your travel information for the flight from Johannesburg to New York (JFK) and hit “Search.”

4.   Booking Award Flights to South Africa on the ANA Website

You need to be logged-in to the ANA website to do the search or the booking.

For a round-trip flight, enter your travel information along with the available dates you’ve found on the United Airlines website, and click “Search.”

The seats for our dates are available.

There are usually plenty of available coach award seats, but finding Business and First Class seats between the US and Abu Dhabi can be difficult.

Check out my post on how to find Etihad award seats!

Getting the Most for Your Miles

Fuel surcharges on coach award seats can often make booking an award flight with ANA miles NOT worth it.

For example, you’ll pay 65,000 ANA miles for a round-trip coach award to South Africa, which is 15,000 fewer miles than United Airlines charges.  Unfortunately, you will also pay $390 for the fuel surcharge, which United Airlines does NOT collect.

So, if you have a choice between ANA and United Airlines miles to book this award, is it worth paying $390 to save 15,000 miles?

Probably not, because this is close to what 15,000 United Airlines miles would cost if you bought them outright.

It gets even worse if you book your flight on other partners.  Some airlines add much more.  For example, a flight on SWISS and Egypt Air would cost you $596 in fuel surcharges.  Ouch!

A Business Class award on South African Airways can be a better deal.  You pay 104,000 ANA miles plus $484 for the fuel surcharge, but it’s a long flight and a good price for a ticket that normally costs thousands of dollars.

56,000 miles is a significant savings.  For example, it costs 57,500 United Airlines miles for a one-way Business Class flight to Europe, which can cost thousands of dollars.  So paying $484 to save 56,000 miles is definitely worth it.

If you can’t get an award seat on South African Airways, try to use United Airlines or Air Canada on one leg of your route to save on some fuel surcharges.  Turkish Airlines also adds a lower fuel surcharge than most other airlines.

ANA Allows You to Mix Classes of Service

Let’s say you want to experience the fabulous Etihad First Apartment on the A380 that you’ve heard so much about.

Etihad First Apartment is only available on the A380 between New York (JFK) and Abu Dhabi.  This is probably one of the best (if not the best) First Class cabins in the history of commercial aviation.

Etihad Airways flies 2 planes between New York and Abu Dhabi – but only one of them is the A380.  The other one is the 777 leased from India Jet Airways, so it’s not easy to get this coveted A380 seat using ANA miles (although it’s much easier from Abu Dhabi to New York than from New York to Abu Dhabi).  However, it might get easier in the near future.

Starting June 1, 2017, Etihad will replace the 777 in favor of a second A380 plane.  Hopefully, that will increase the number of available award seats, but what if you can’t find a First Class seat on both an outbound and inbound flight?

Because ANA allows you to mix classes of service, you can book one-way in coach or Business Class, and a flight back in First Apartment.  Or vice versa.

This is also helpful if you don’t have enough miles for booking a First Class seat both ways.  Unlike many other airlines, ANA allows you to mix classes of service and charges you accordingly.

Here’s what you’ll pay between the US and South Africa round-trip in mixed classes:

How to Earn ANA Miles

ANA is a 1:1 transfer partner of American Express Membership Rewards and Starwood Preferred Guest.  And if you collect Marriott points, you can transfer them to Starwood at a 3:1 ratio, and then to ANA.

Remember, you’ll earn an extra 5,000 ANA miles for every 20,000 Starwood points you transfer to the program.

Folks with American Express Membership Rewards points or Starwood points can transfer them to ANA miles!  And using ANA miles to fly to South Africa can be a good deal, especially in Business Class.  But watch for fuel surcharges.  And you must book a round-trip flight.

Some airlines charge a few hundred dollars, like Turkish and South African Airways, but others, such as SWISS, Lufthansa, and Virgin Atlantic, charge much more .  When you have a choice, try to use United Airlines or Air Canada for one of the legs of your journey to reduce the taxes and fees.

However, if you want to avoid paying fuel surcharges completely, use ANA miles on Etihad with a connection in Abu Dhabi.  Not only will you pay considerably fewer miles than you would with other programs, but the cash portion of your trip will come to just a little over $100.  That’s an excellent deal. 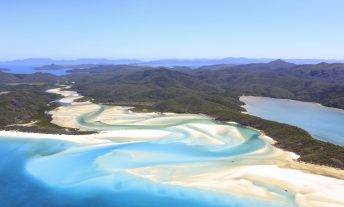 These three cards offer a blank airline ticket to anywhere in the world (round-trip!) as a welcome bonus