Is it me, or does it seem like every time you go to the airport the restrictions on carryon luggage become just a bit more difficult to manage?  Gone are the days of unlimited checked bags and free-for-all carryons.

Think you should pack a winter coat for that trip to Chicago in February?  Better to just try your luck and double up with two sweaters.  There’s zero chance you can fit that down parka in your backpack.  These are the days of cheap flights with expensive upgrades.  Sure, you can fly from Denver to NYC for $120 roundtrip, but with baggage fees increasing, your luggage will cost almost as much as the seat next to you!

Of course you can avoid checked baggage fees with the right credit card.

Have you watched someone struggle to stuff their extra-sized bag into the overhead storage bin while holding up the line of people trying to get to their seats for take-off?  Of course, you have!  Even worse, have you ever been stopped by a gate agent (hi, Frontier Airlines) who made you try to squeeze your carryon into one of those “does it fit” boxes?  I have, and it feels so embarrassing.  Especially because typically, no, it doesn’t fit.

But now, there’s a cool new solution that can help answer this question before you even leave for the airport.  Both Kayak and KLM have developed a feature on their app that allows you to measure your bag so you won’t have to stress at the airport.

Almost every airline has a different set of specs for what they’ll allow as a carryon.  Yes, you can pay extra to secure your bag some space, but do you have to?  That’s always the question.  Since there is so much variation between the airlines, I thought it might be helpful tryout and compare the virtual luggage sizer on these two apps.  This might be the right solution for people who are wondering if they need to pay for a checked bag, or if they can get by with the standard-sized carryon that’s allowed with some airfare.  Here’s what I thought about each one.

Ok, in theory, this is actually pretty great.  You’ll need to make sure your camera is enabled to use this feature.  You can check either a handbag or an accessory.  First, you’ll scan a spot on the floor.  Then, you’ll scan your actual bag.  The app will tell you if it’s permitted as a carryon or that it’s too big.  Currently, the KLM app is only available on iOS (Apple’s operating system), and it’s free to download.  Apparently, this app is pretty popular.  KLM says there are over 100,000 people that use this feature every day.

If you’re flying on a different airline, you might want to check out Kayak’s app.  They’ve created a similar feature, but you can actually select the airline you’re traveling on.  This is super handy because (as mentioned before) most airlines have individual standards for what they’ll allow as a carryon or personal item.  The process is the same, but the interface is a bit different.

For now, the Kayak app is also only available on iOS.  It’s free to download and this feature is included.

Would I Use This App in the Future?

Sure, it’s helpful to use these apps to measure a bag.  I like that the interface makes it really easy to use and with the Kayak app, you can see exactly what the airline you’re flying on will allow as a carryon.  This can save a lot of time when you’re booking your flight because you don’t need to read through the specific bag size allowances.

This can also save you money.  For example, if you know your bag is going to be too big, it’s often cheaper to pay to check it before you arrive at the airport.  On the other hand, some airlines actually offer gate-check service.  So playing dumb, and bringing a bag that’s too large to carry on might work to your advantage in some situations.

But both of these apps are pretty clunky once you actually try to capture the size of your bag.  It took me several tries to successfully measure my bag with each one.  I know it takes a while to adopt new technology, but there’s definitely a point where it just doesn’t seem worth dealing with a new app if it doesn’t really save time.  So I’m on the fence about these two apps.  I love them in theory, just wish that they were both a bit more accurate on the first or second try.

Do you think you’d use an app that allows you to measure your carryon?  Or does this feel more like an unnecessary gimmick?

Let me know what you think in the comments section below – I’m still undecided, very much on the fence here!

Erin Lizzo is a contributor to Million Mile Secrets, she covers topics on points and miles, credit cards, airlines, hotels, and general travel. 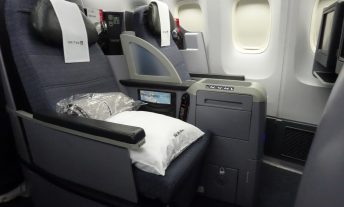 Booking ANA with Virgin miles: One of the best values in award travel gets even better