With over 130 million customers in 2019 alone, Southwest has made a name for itself with no baggage fees and programs like Transfarency, a customer-first mentality that prioritizes being up-front about its policies and fees.

Still, with COVID claiming more than just human victims, many businesses have been forced to shutter in the face of devastating closures, travel restrictions and social distancing mandates. Airlines have been especially hard hit, with the industry shedding tens of thousands of jobs and burning through billions of dollars in cash over the last few months.

What type of impact has the COVID-19 pandemic on Southwest Airlines? Can it really keep up its customer-friendly policies or will it need to add fees to make up for lost revenue?

How has Southwest fared during the pandemic?

The airline industry is one segment of the travel sector that has been particularly hit hard by the pandemic. Southwest joins competitors like United and Delta who are facing dark financial times.

Before COVID upended everything in March, Southwest Airlines didn’t charge cancellation fees, nor were there any fees to change your reservations, so there are no changes or losses happening here.

“I want to take a moment to remind Customers of our flexible policies,” said Ryan Green, senior vice president & chief marketing officer for Southwest, in a written statement on Southwest’s website. “These policies have always been in place at Southwest Airlines and provide our customers peace of mind every day.”

Southwest has benefited from $1.6 billion in government funding assistance for those facing employment losses and shortages from coronavirus.

“We are grateful for the Payroll Support Program (PSP) proceeds we received from the U.S. Treasury under the Coronavirus Aid, Relief, and Economic Security Act (CARES Act), which has helped to protect jobs for our more than 60,000 Southwest Employees,” said Gary Kelley, CEO of Southwest, in a statement on the airline’s second quarter results.

2020 marks Southwest’s first quarterly losses since 2011, with losses of $915 million in the second quarter alone. May 2020 revenue was down by 95% compared to the same time last year. The airline plans to recoup those losses by enticing customers to purchase tickets through improved cleanliness standards and limited ticket sales (blocking middle seats) for each flight.

Kelly addresses what he calls a “volatile demand environment” in response to 2020 earnings. “As our nation continues to battle the COVID-19 pandemic, demand for air travel remains weak, which was the driver of our second quarter net loss. We were encouraged by improvements in May and June leisure passenger traffic trends, compared with March and April.”

Still, he acknowledges that troubled times may continue. “The improving trends in revenue and bookings have recently stalled in July with the rise in COVID-19 cases. We expect air travel demand to remain depressed until a vaccine or therapeutics are available to combat the infection and spread of COVID-19.”

First-quarter reporting is in for the Bureau of Transportation’s annual list of baggage fees, and Southwest is at the very bottom of the list for its largely free baggage fees.

When compared to other airlines, this policy represents a significant stream of income that Southwest could be benefiting from during these hard times.

(Dollars are in thousands)

With over $1 billion generated from bag fees in the first quarter of the year 2020 and more than $5.7 billion earned in 2019, Southwest is missing out on a big part of the pie with its free baggage policy.

The airline industry collected more than $650 million in change and cancellation fees in the first quarter of 2020, but Southwest’s portion was so small that the Bureau of Transportation Statistics didn’t even make it into the list of top airlines.

Within the last two weeks, major airlines like Delta, United, American and Alaska announced they would be waiving change fees indefinitely on domestic flights and select international routes. With this move, it’s highly unlikely Southwest would make fire back by adding more ancillary fees and policies that hinder flexibility, which is what customers are craving most right now.

Still, the lack of fees is what inspires such strong customer loyalty from so many of its fans.

“Southwest is one of my favorite airlines,” WWE wrestler Mojo Rawley tells Million Mile Secrets. As a pro wrestler who frequently travels around the U.S., Rawley spends a lot of time in the air.

He is a loyal Southwest fan because, as he explains, “For a road warrior for me, Southwest’s flexibility and generous policies are what exactly I need for a life spent on the road, bouncing from stadium to stadium.”

“From my perspective as a profitability consultant who looks at customer service as a major factor in business success, is this: Would Southwest maintain its extreme customer loyalty if it were just like any other airline? And I think the answer would be no,” said Horowitz.

He remembers a time when a snowstorm shut down local airports and almost threatened a long-awaited cruise. “I can’t imagine being able to change the itinerary like that on any other airline. That kind of customer service creates a base of not just fans, but brand ambassadors.”

On top of blocking middle seats for increased social distancing and increased airplane cleanings, Southwest has even allowed flyers to convert travel vouchers into Southwest points at a very competitive rate, something no other airline has offered. Hopefully, that’s a positive indication of Southwest’s approach to future fees.

Even though all airlines are severely struggling right now, Southwest is in a better financial position than others.

“We entered this crisis prepared with the U.S. airline industry’s strongest balance sheet and most successful business model,” said Kelley. “While the impact of this pandemic is unprecedented, we believe that demand for air travel will rebound, and we fully intend to be ready and well-positioned when it does.”

“Southwest, with the best balance sheet, liquidity and staying power in the U.S. airline industry, is playing the long game, unlikely to change its DNA, even as others in poorer financial positions and with a history of reliance on fees attempt to mimic it,” Mann told Million Mile Secrets.

At a time when much of the future remains uncertain, travel remains fluid and flexible in response. An airline like Southwest that already has flexible policies does not have to struggle through new company-wide changes in a time of corporate unrest and chaos.

When reached for comment, Southwest told Million Mile Secrets it has no plans to add change fees in the future.

“Customers traveling on Southwest Airlines can have the peace of mind that they will not be penalized for changing their plans,” a Southwest spokesperson told Million Mile Secrets. “In fact – we’ve never had changes fees, and no plans to do so in the future…”

The airline industry will continue to suffer until the world can get the COVID-19 crisis under control. However, it appears that Southwest is better prepared to face the storm than others. Because of Southwest’s history, solid financials and the other major airlines killing many change fees, we’ll likely see Southwest raise revenue through alternative methods.

Featured photo by Felipe I Santiago/Shutterstock. 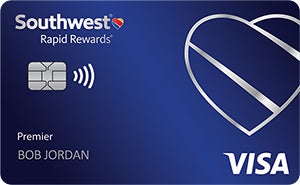 Lena Borrelli is a contributor to Million Mile Secrets, she covers topics on points and miles, credit cards, airlines, hotels, and general travel.