Travel Tip: Listen to Muted TV in Airports, Restaurants With This App! 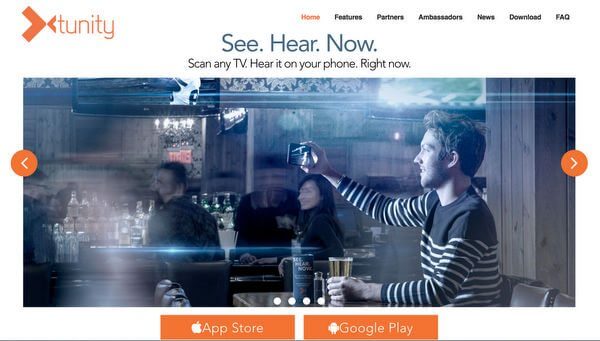 Ever find yourself stuck in an airport or loud restaurant, staring at a muted TV?  It’s frustrating not being able to hear the audio, especially if there’s breaking news or a sports game you want to watch.

Tunity is a free app that lets you listen to live TV even if the television itself is muted.  You can scan the TV through the app, and it streams the audio directly to your phone.  It’s useful in any public space.

I’ll show you how it works!

How to Use Tunity to Listen to Live TV

Tunity lets you listen to any muted TV.  It’s useful in an airport, restaurant, waiting room, gym, or any other public space.

The app has audio feeds for 60 different channels.  It especially has a lot of sports options.

Here’s how to use the app!

Depending on the device you have, download Tunity for iOS or Android.  It’s free!

When you open the app, it brings you to the scan screen right away.

When you’re ready to scan, point the orange box on your phone screen at the TV.  Then, press the “Tap to scan” button.

You can scan the TV screen from a distance, like from your table at a restaurant.  The scanning takes ~10 to 20 seconds.

Once the scan goes through, you can fine-tune the sync of the audio with your TV by tapping the rewind and fast-forward buttons.

It usually works on the first try.  But if the scan doesn’t go through, you can try again, or view the list of available channels.

If you want to scan again, just follow the same process.  If you want to see which channels are available in your area, just press the “Rescan” button at the top right-hand corner to scan the TV again.

It shouldn’t take more than a couple of tries to get it to work.

Million Mile Secrets team member Scott successfully used Tunity to watch the Major League Baseball World Series while in the Dominican Republic.  The TV station audio was in Spanish, but with Tunity he was able to stream the US-English audio feed.

Most of Tunity’s channels do not exist outside the US.  But it has news and sports feeds that are useful internationally.

Outside the US, some TV feeds were very out of sync Tunity’s audio feed.  But I could only rewind the audio feed by a couple of seconds.  So adjusting the audio feed didn’t work.

Tunity also has some big limits on listening to CBS, NBC, FOX, and ABC.  You can listen to them all the time in the New York area, but their availability varies in other areas of the country.

Tunity is a free, convenient way to listen to a muted TV in a public space, like the airport.  You can use it with iOS and Android devices.

The app has a good variety of audio feeds.  I like how you can sync the audio feed with the TV you’re watching, even though it’s not perfect.

But Tunity works well most of the time.  It is very simple to use.  I always used to be frustrated when I would stare at a muted TV while waiting for a flight.  And Tunity solves that problem!

Have you used Tunity to listen to TV?  I’d love to hear your thoughts!

called and e-mailed them several times with no answer
when downloading app, you get a 1 time trail, then must register, some places on the internet has a price list but when you try to comtact them you never get an answer. Ever

The televisions are muted so that people can hear the announcements. When there are multiple sound sources, it makes it difficult for people with hearing loss and people with hearing to hear critical announcement let alone to think. We are grateful that the airports have chosen to mute the sound. I can’t wait to try this app which will solve this issue for people who do want to hear the sound without disturbing other people.

I am also very grateful for the muted TVs – especially when I want to read a book. 🙂

If only there were an app that would mute all TVs in public places. One can dream…

Working on just getting the sound shut. 🙂