The Southwest “award chart”: A double-edged sword of simplicity and uncertainty

That’ll get you on our way to earning the coveted Southwest Companion Pass. The following cards offer that bonus:

Now that you’re on your way to earning all those Southwest points, you might be curious how close you are to a flight? You won’t find your answer on a traditional airline award chart. Southwest doesn’t have an award chart. I’ll discuss the pros and cons of this below.

Many airlines have a fixed award price depending on your origin and destination. For example, United Airlines charges 30,000 miles for a one-way coach flight from the U.S. to anywhere in Europe. Whether you fly from New York to Paris or San Diego to Moscow, you’ll pay 30,000 miles, although that is all changing for United Airlines awards for travel after Nov. 15, 2019.

Other airlines, like British Airways, price award seats based on the distance you fly.

Southwest simply charges according to the cash price of the ticket. Southwest Rapid Rewards points are worth ~1.5 cents each toward Southwest flights based on our valuations.

If you open a card like the Southwest Rapid Rewards® Premier Business Credit Card, you could receive $900 worth of Southwest flights. The card comes with 60,000 Southwest points after spending $3,000 on purchases within the first three months of account opening.

The obvious upside to this method is that when Southwest has a sale, both the cash price and the award price go down. In the past, I’ve purchased one-way flights for ~3,000 points from Cincinnati to Chicago during Southwest sales.

As an example, here’s a look at the current Southwest prices from Austin to Atlanta. 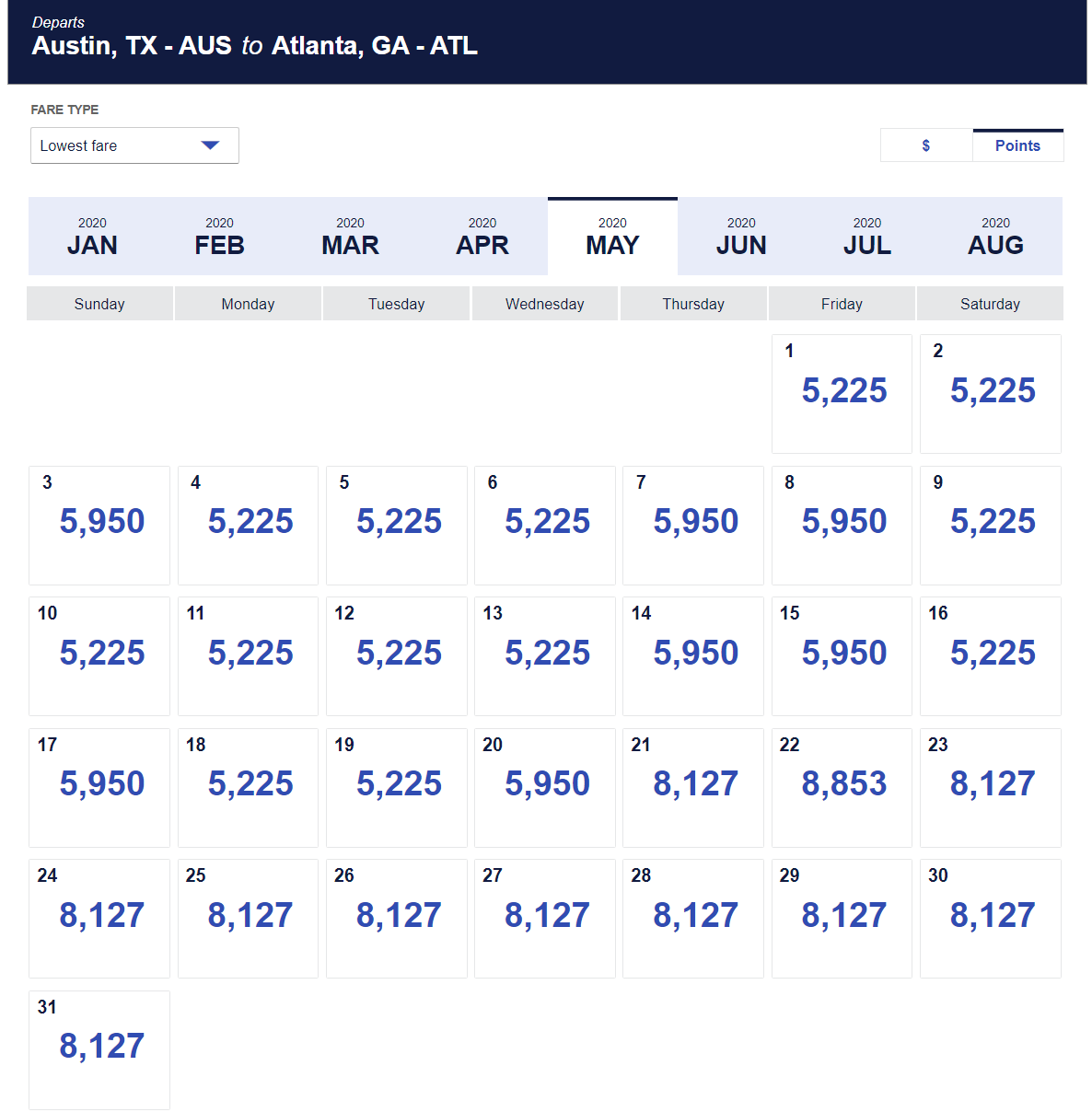 Many of the flights cost less than 6,000 points. To compare to other airlines, this same trip costs as little as: Many Southwest flights often price out far cheaper than other U.S. airlines, so you’ll save when you use Southwest points.

The downside is that you can’t predict the exact award prices for your Southwest flights. Although Southwest is touted to have rock-bottom prices, sometimes they don’t.

Some airlines have more predictable prices for their fares. For example, United Airlines often charges 12,500 miles one-way for domestic flights (though not always). If you have 12,500 miles, you can pretty well know what you can get from them. With Southwest, you must continually check every route to see what it will cost. Award prices fluctuate alongside the cash price.

Southwest allows you to change or cancel your award flight at no charge. So if you book a flight and later find a cheaper ticket, you can simply cancel your reservation and rebook to get the lower price.

For example, if peak holiday flights to your grandma’s house on the East Coast cost $900, you can expect to pay 60,000 Southwest points. United Airlines may still charge just 12,500 miles (provided there are “saver” seats available).

Southwest simply prices its award seats according to the cash value of the ticket and Southwest points generally are worth ~1.5 cents each toward Southwest flights. If the flight you want costs $300, you will need close to 20,000 Southwest points and you will still have to pay taxes and fees on your award flight.

What do you think of Southwest’s award structure? Do you prefer an “award chart” that’s based on the cash price of a flight, or do you like the structured award charts?

Be sure to subscribe to our newsletter for more miles and points know-how.

Joseph Hostetler is a full-time writer for Million Mile Secrets, covering miles and points tips and tricks, as well as helpful travel-related news and deals.