This is a continuation of our recent First Class trip to India, a journey where we had Big Travel with Small Money!

The Flagship Lounge in Chicago was very close to our gate so we were soon walking down the jet bridge to get inside the plane.

The flight attendants greeted us at the entrance to the plane and asked us to “turn left” as we entered the aircraft. This was our welcome to American Airline’s Flagship service from Chicago to London!

We turned left and walked to our seats. We had chosen the middle 2 seats in the second row so that we could swivel our seats and have dinner together.

The cabin was clean and on the seats was a blanket, amenity kit, and a mattress pad.

The seats looked a bit old, but that was likely because the aircraft was old too!

We went to our seats and chatted with the couple behind us. They, too, had redeemed miles for their flight from Chicago to Cape Town with a stop over in London!

We were soon served Champagne.

Unlike Emily’s trip back on Jet Airways, the Champagne wasn’t Dom Perignon and the bottle wasn’t left with us.  But it was still Champagne!

We chatted for a while over Champagne and then took a few pictures.

Our flight was delayed for about 50 minutes, which meant that we would have less time to explore the lounges in London. Oh well, stuff happens.

Fortunately, we had a 3 hour layover, so we wouldn’t miss our connecting flight.

I took pictures of the amenity kit and reviewed the menu to pass some time.

Soon we were in the air and it was time to eat (my favorite activity!). Did I mention the time I ate an entire jar of Nutella while surfing the web? I haven’t bought Nutella since. Anyway…

Now, the good thing about American Airline’s First Class is that the middle seats can swivel and face each other and that you can join the tables together to have a private dining experience.

This is much more comfortable than in many other airlines where you have to sit on a little stool if you want to dine facing your travel partner.

To start, we had warm nuts and vegetable strips served with dip (ranch?)

We then progressed to the appetizers of (Emily is allergic to fish) citrus marinated shrimp accompanied by capers, red onion and sour cream.”

After the appetizers, it was time for what the menu described as “Fresh Seasonal greens with artichokes, red bell peppers, kalamata olives (the olives are back!) and cucumbers, offered with honey Dijon dressing or Sapori D’Arte olive oile and balsamic vinegar. Sliced lemon garlic chicken breast”

For my main course, I ordered Coriander Lime Chicken which was described as “Breast of chicken flavored with coriander and lime, served with pumpkin sauce, tomato couscous and stir-fried vegetables”

I preferred Emily’s steak! Why is she always right?!

Emily ordered the Chateaubriand with Red Wine Sauce which was described as “Grilled fillet of beef enhanced by a red wine and shallot sauce, offered with haricots verts and mustard mashed potatoes”

The steak was tasty!

For dessert Emily had the Ice Cream Sundae, described as “Vanilla ice cream with a choice of hot fudge, butterscotch or seasonal berry toppings, whipped cream and pecans.”

I had the Fruit and Cheese, described as “A selection of gourmet cheese offered with flavorful dried fruit and assorted crackers”

The description was accurate because there was exactly one piece of dried fruit. See if you can spot it in the picture!

After the cheese and port wine, it was time to sleep (another of my favorite activities!). I helped myself to the mattress pad from the seat next to me since it was empty and placed it on my seat for some additional padding.

Soon I was fast asleep. We asked not to be awoken for breakfast, so I don’t have any pictures to share.

Our flight landed smoothly at London Heathrow and after 15 minutes we were at our gate. We got off the plane and made our way to Terminal 5, but not before paying homage to the security gods (lowercase “g” intentional) who evidently had not seen an Epi-pen (Emily is very allergic to fish and needs to carry 2 Epi-pens with her).

They performed all sorts of tests and measurements on said Epi-pen and wrote in secret diaries and conferred in whispered voices with colleagues.

But soon we were free (the Epi-pens too!) and we headed to the Concorde Lounge!

Bottom Line: It was nice to have a flat bed to sleep on for our journey to London – that’s Big Travel with Small Money!

But the American Airlines First Class seats need some major upgrades, and the staff need to be a bit more attuned to their customer’s needs especially when you consider the retail price of a First Class seat from Chicago to London.

We got the impression that we were intruding upon the Flight Attendants time by eating our dinner slowly and weren’t made to feel as welcome as we would on our other flights. But, this flight was much better than Emily’s flight back on American Airlines where a garbage bag was hung in front of her seat and she was yelled at when she took a picture of the hanging garbage bag!

Stay tuned for the installment where we experience British Airway’s First Class Concorde lounge in London Heathrow and get a 15 minute massage in the lounge!

What do you think?

What do you like the best about First Class travel? The bed, the food, the service, or the space?

Tell us about it in the comments! 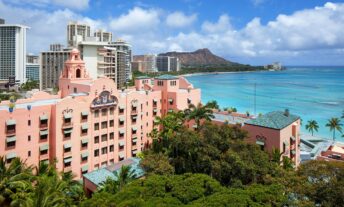 A comparison of the United Airlines credit cards