US Air to Acquire American Airlines & What it Means For You

This is very similar to when Continental took over United Air and kept the United name.

I’m personally not a fan of the merger.  It almost certainly means higher prices for air tickets and reduces the incentive for the merged company (as well as other airlines) to have a good frequent flyer program.

The settlement also says that the airline will maintain their current hubs for 3 years in Charlotte, New York (JFK), Los Angeles, Miami, Chicago (O’Hare), Philadelphia, and Phoenix.  After 3 years, all bets are off and you can certainly expect some of the East Coast hubs to lose flights.  That’s because the combined airline can make more money by closing some of those hubs and forcing folks to connect in other cities.

So what does this mean for our miles and points?

Barclays currently issues the US Air credit card.  The best current offer is for 35,000 US Air miles after your 1st purchase and which waives the 1st year annual fee.

This is a better offer than the link which pays me a commission (click the link to compare offers, but do NOT apply for this version), but which offers you only 30,000 miles and does NOT waive the $89 annual fee.

This card is unlikely to be around in the next 12 months so you may as well get 35,000 US Air miles now, which will eventually become American Airlines miles.

US Air Will Leave Star Alliance and Join OneWorld

US Air is currently a member of the Star Alliance (the same alliance as United).

During previous mergers, for example between Continental & United or Southwest & Air Tran, you were able to transfer points or credits between the merging airlines.

You also have a short period of time to take advantage of some of the great redemption options with US Air miles, such as being able to fly to Asia with a stopover in Europe for only 60,000 miles in coach, 90,000 miles in Business Class, and 120,000 miles in First Class.

For example, it is only 4,500 British Airways miles for a 1-way award from Kansas City to Chicago on American Airlines.

But that same flight would cost 12,500 miles if I had used American Airlines miles.

Once US Air and American Airlines combine, you will be able to use your British Airways Avios points on additional flights which are currently operated by US Air.

Expect higher prices and a less generous frequent flyer program in the long-run because of US Air acquiring American Airlines.

But in the short-term, you can stock up on 35,000 US Air miles, which will eventually become American Airlines miles. Earn 12,750 Amex points by depositing $1 in a checking account that’s great for travelers 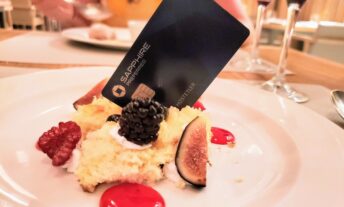